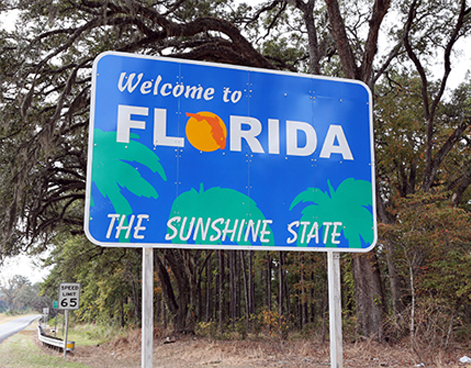 
As the state of Florida's population continues to rise, so does the interest in real estate opportunities by developers and investors. According to CNN, Florida soon may pass New York as the most populous state in the country. Further, Stan Smith, population program director at the University of Florida, projects that Florida could overtake New York even as early as this year or next.

With this incredible growth across the state, developable land is becoming increasingly scarce and ever more valuable, prompting many in the real estate market to act quickly before prices escalate.

Although mild weather continues to be a strong contributing factor to this growth, one also can point to other societal changes, such as a decline in manufacturing in the northeast, as well as immigration from other states and from abroad. Conventional wisdom has been that people in the twilight of their lives would move to sunny Florida is, many are seeking its haven for career and investment opportunities, as well.

From the Panhandle all the way down to Key West, the prime metro markets throughout Florida are experiencing a boom of sorts. For example, Orlando, home to Walt Disney World Resorts, dramatically has outpaced the population growth of both the states of Florida and the United States in its entirety. Since 2000, the U.S. population has grown by 9.71% Over that same span, Florida's population as a whole has grown by 17.67%. On top of that, Orlando has experienced a whopping 28.15% growth during this period, far exceeding the state's overall impressive growth.

South Florida, with its broad appeal to the international market, is of particular interest to developers and investors. For both residential and commercial real estate opportunities, the counties of Miami-Dade, Broward, and Palm Beach continue to offer great and broad appeal. As turmoil around the world causes many international investors to want to "park" their money in the U.S., many choose South Florida due to its proximity to their native country (notably in Latin America), its attractiveness as a vacation spot, and its diverse demographic mix.

Central Florida - generally encompassing the Orlando, Tampa, Clearwater, Lakeland, and Daytona Beach markets - possesses several demographic, political, and cultural elements that distinguish it from other areas of the state. While North Florida (Jacksonville and the Panhandle) overwhelmingly is considered to be politically conservative, and South Florida is considered to be more liberal, the majority of Central Florida residents consider their area to be on the moderate side. Tourism, not surprisingly, is by far the most significant industry in both Central and South Florida, along with a much smaller but still important agricultural industry. Central Florida's climate is ideal for growing strawberries, citrus, and various vegetables. As a high-tech industrial hub, Metro Orlando has the seventh largest research park in the United States. Central Florida Research Park, the engineering and business school of the University of Central Florida, caters to defense companies, such as Lockheed Martin and Siemens. Central Florida's rise in popularity also is attributed to its appeal to military veterans, with an estimated 400,000 living in the ten counties of Central Florida. This demographic group's growth prompted the Veterans Administration to build a $665 million hospital in Lake Nona.

As a reflection of the state's top-to-bottom appeal, the two cities with the highest population are at opposite ends, with Jacksonville ranked first and Miami ranked second. Tampa and Saint Petersburg come in third and fourth, respectively.

Clearly, regardless of where one looks throughout the entire state of Florida, the opportunity for growth in both the residential and commercial sectors is consistently strong and on the rise.

Featured Property of the Month